The Tasmanian election will be held on 1 May 2021. All 25 seats in the House of Assembly (lower house) and 3 of the 15 seats in the Legislative Council (upper house) are up for election.

The Tasmanian Liberal Party currently led by Peter Gutwein has been in government since 2014. Premier Gutwein will be contesting his first election since he became Premier after Will Hodgman’s resignation on 14 January 2020. The government is currently in a minority government with only 12 of 25 seats in the House of Assembly.

The poker machine reform was a key policy issue at the 2018 election and set to be legislated in the current term of government. It was postponed in March 2020 due to the COVID-19 pandemic. The proposed reforms included a state-wide cap on the number of machines and would also allow the pubs and clubs to own them outright which would break down the monopoly of machine owner Federal Group.

The reform to Tasmanian TAFE or TasTAFE is designed to transform the TAFE system into a government business enterprise. The Premier has stated that the proposed reforms would make the TasTAFE system more responsive to industry needs.

Labor Leader Rebecca White holds the position that spending time making the reforms will delay economic recovery and result in lower-quality training and education. Casey O’Connor, the leader of the Greens party has stated that the reforms would lead to less ministerial oversight and decrease the quality of education.

The government has proposed legislation to increase the transparency of the political donation disclosure system. One major change is the disclosure of amounts between $1000 and $5000 and these donations would be declared every six-months.

While announcing the election, the Tasmanian Liberals have stated they will voluntarily disclose their political donations exceeding $5,000 prior to the election and encourage other parties to do the same.

Current Composition of the Tasmanian Parliament 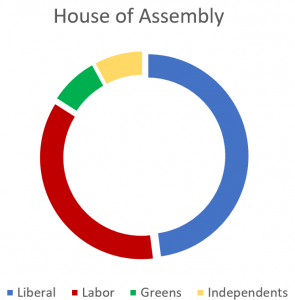 The 25 seat House of Assembly is elected on the Hare-Clark voting system. The system provides a proportional representation (like the Australian Senate) using preferential voting (like the Australian House of Representatives). This system involves counting the first preference votes of each candidate against a quota which is determined by the number of valid votes against vacancies. Once a candidate reaches the quota, they are determined to be elected and their surplus votes are distributed to the continuing candidates according to preference flows. There are five districts in Tasmania and each electorate has five representatives in the Assembly.

The Legislative Council will have 3 of 15 seats up for election. The government is currently in a minority in the upper house with independents holding a majority of the seats. A further three seats will be up for election this year in May 2021 and two in May 2022.

The seat of Clark has two independents both of which were former Liberal and Labor MPs. Both parties can win back these seats and likely that the Liberals will gain one seat in this division given their strong 52% primary polling position.